Energy input is the key parameter for holistic development of agriculture sector. Among all the energy inputs, nature of input energy for operating irrigation system changes from time to time. In ancient time animate energy was major contributor for the irrigation development. During the last 35-40 years, mechanical and electrical energy have become essential prime mover for operating irrigation system. 1975-2000 was the golden period of small land holder irrigation in South Asia. Since 1975, the spontaneous boom in private investment in small boreholes and mechanized diesel and electrical pumps and mushrooming irrigation service market have revolutionized irrigation agriculture. Catalytic measures like Government policies supported the pump irrigation, revolution through expansion of institutional credit under minor irrigation, various subsidy schemes on pumps and boring, support to farm electric and electricity subsidy have played major role. Resulting, tremendous changes in utilization pattern of water resources. Ground water exploitation for irrigation was become easy and major source of irrigation. It has adverse impact on water resources, electrical industry and also on the irrigation input cost.

2. What is Solar Pumping System 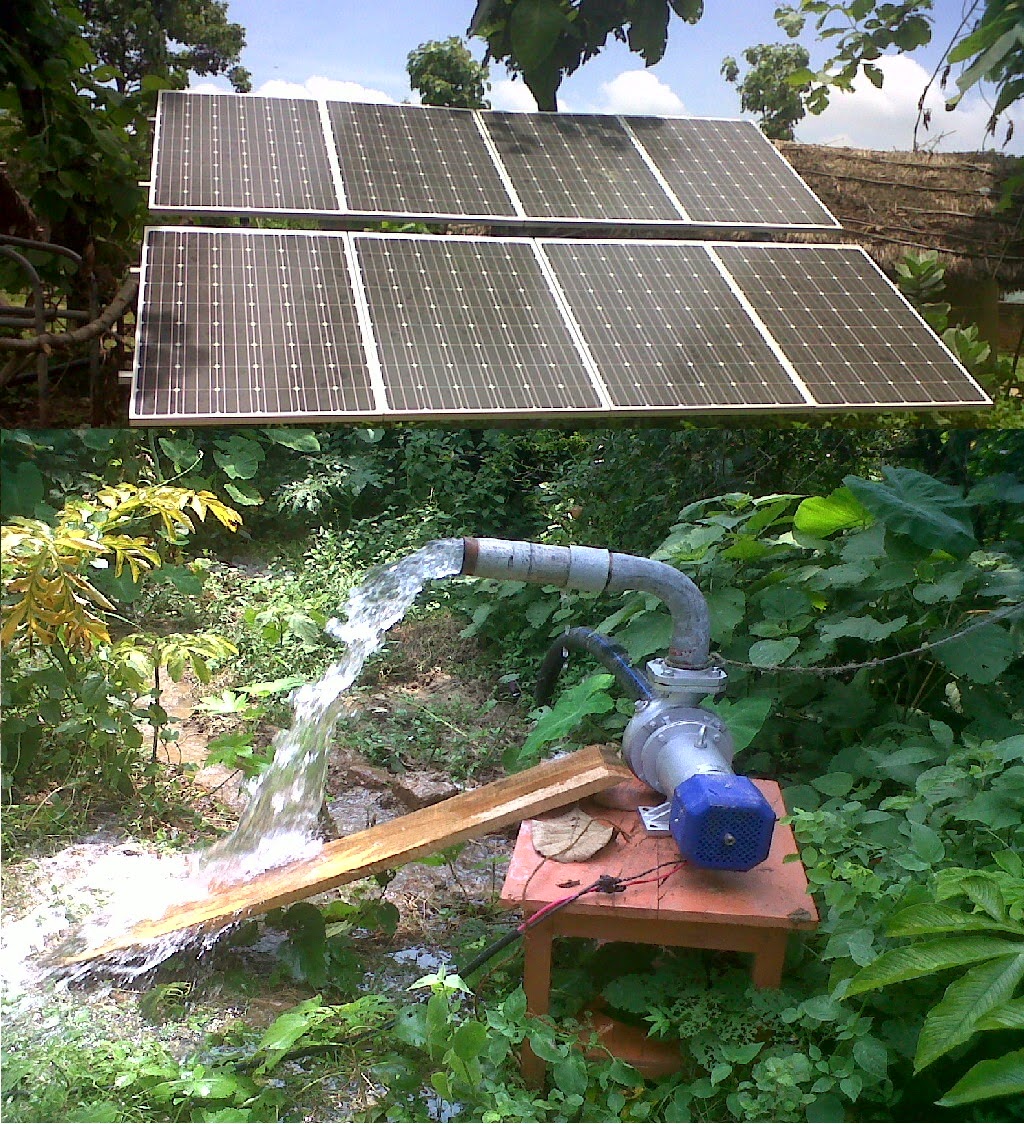 1.      Photovoltaic (PV) array : Capacity in the range of 200 Watt to 5 KWp and can be mounted on a suitable structure with a provision of tracking the sun

I) Government of Uttar Pradesh providing subsidy up to Rs.2 Lakh for 2 HP solar pumping system and farmers’ contribution is Rs.70,000/- Only under RKVY.

Economics of the solar pumping system is depends on various factors such cropping patterns, nature of the existing irrigation system (own / custom and hiring basis), supplementary irrigation system, assistance available under different schemes, fuel prices, depth of ground water, etc.  so that techno-economic feasibility of the same solar system would be different in different operating conditions. Economic feasibility of the same, therefore, is determined on the basis of below listed assumptions, which are closely prevailing in eastern UP.

1) Cropping Pattern :  50% area under sugarcane and 50 % area under Wheat and Paddy
2) Benefits of the solar pumping is taken saving of diesel fuel in respect of farmers’ having their own diesel engine OR
3) Benefit of the solar pumping is taken saving of custom charges for those farmer, who do not have their own prime motor / Irrigation system.
4) Average discharge of shallow tube wells is taken 12 liters per second
5) Average time of irrigation to cover one ha of land is 16 hour No of hours actually operated by the famers to irrigate crops is considered.


6. Irrigation requirement as per scientific package of practice for the major crops

7. No of hours required for irrigation as per the crop requirement and actual numbers of hours actually operated by the farmers

A)Famers having their own diesel engine system


A)       Famers having their own diesel engine system

Condition A1: Economic Returns ( Without any subsidy)

Condition A2: Economic Returns ( With Subsidy of Agriculture Deptt. - RKVY)

Condition A3 : Economic Returns ( With subsidy of GOVT OF INDIA Via NABARD)

Condition B1: Economic Returns ( Without any subsidy)

Condition B2: Economic Returns ( With Subsidy of Agriculture Deptt. - RKVY)

Condition B3 : Economic Returns ( With subsidy of GOVT OF INDIA Via NABARD)